Read on to meet some of the amazing birds that use salt and brackish marshes, and next time you’re by the coast, look and listen to see if you can spot some! 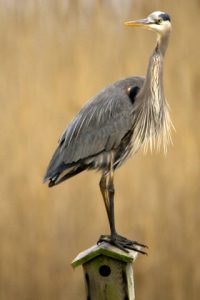 These guys are some of the easiest birds to spot in a tidal marsh. They are tall and are bluish-gray overall, and you’ll often see them wading around in the water with their long legs. Their long, spear-like bill helps them catch fish. If you are lucky enough, you may even see one of their rookeries, or breeding areas, during nesting season. 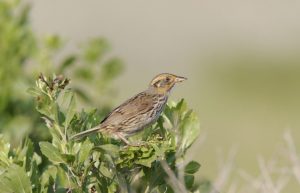 These sparrows are some of the most secretive birds of the salt marshes. They are fairly small and fly low across the grasses, only to quickly disappear within them. When the males sing, their song is so quiet that it sounds almost like a whisper. They like to make their nests on the ground, often under tufts of salt meadow hay (Spartina patens), to hide them from predators. Keep your eyes peeled and your ears open and you might just be lucky enough to spot one of these secretive birds. 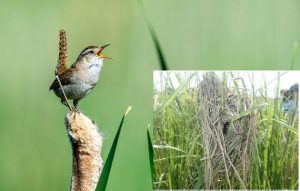 You will probably hear these little birds before you see them; although they are small, they have a loud and bubbly song, and they certainly aren’t afraid to sing it! Their little brown bodies blend in with the tall grasses of brackish marshes that they like to perch on, often with each leg on two different grass blades. Their nests are off of the ground and are weaved out of grass pieces, creating a sort of elevated basket with a side entrance. 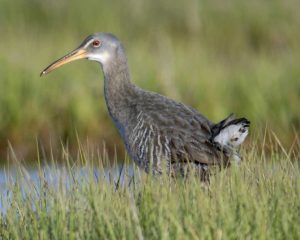 Clapper rails are much larger than salt marsh sparrows, but they are still pretty secretive. Their call is a loud “kek kek”, and you’ll often hear it when planes startle them.  They are often hidden in salt marsh grasses, but they do come out to muddy or shallow water areas to feed on crustaceans and small fish. They make their nests out of marsh grasses on the ground, and the nests can be tricky to find. 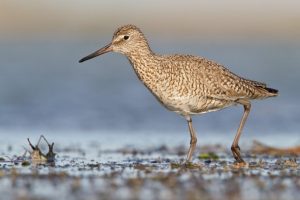 Willets are light grayish-brown birds with bright white marks on their outspread wings. They feed on insects and crustaceans in marshes, mudflats, and along beaches. They make their nests in salt marshes out of grasses, and the nests blend in very well with their surroundings. Their call is often very loud, particularly when they feel their nest is threatened. 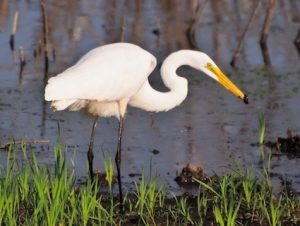 Great egrets are pretty easy to spot in marshes due to their relatively large size and their bright white color. They use their large bill to catch fish as they wade around in mud and shallow waters. Like great blue herons, they nest in colonies. You may also see snowy egrets in the marshes, which are similar in appearance. The tricks to tell them apart are that great egrets have yellow bills and black legs and feet, while snowy egrets are smaller in size, have blackish bills, and have black legs with yellow feet. 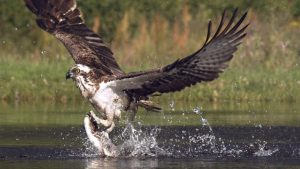 Osprey are birds of prey that are smaller than the bald eagle, and catch fish right out of the water with their sharp talons. They like to fly over marshes looking for fish in nearby waters, and will often hover in one spot when they think prey is near. Osprey like to nest on tops of dead trees, but they will also readily nest on man-made nesting platforms in salt marshes. Their nests are made of many sticks and are very large and visible, so keep a look out and you might find one.

As you have learned, birds that you see here, and many others, rely on salt and brackish marshes for survival. Unfortunately, many of them are facing trouble as climate change, rising sea levels, and human disturbance negatively affect their nesting and feeding wetland habitat. It’s up to people like you to spread the word to help them and their habitats!

The great news is, there are amazing online resources out there to learn more detailed information about these and other coastal marsh birds and the dangers they are facing from habitat changes. You can even become a citizen scientist and record your bird observations for scientists to use to help these birds out. Here are a few wonderful resources to learn more, have fun, and participate in marsh bird conservation:

Curious as to what Delawareans think about wetlands? In September of this year we polled 600 Delaware residents across our three counties to find out.  We wanted to see if people knew what wetlands are, their benefits, if they think they are good or bad, and where they are getting information about the environment.

Based on the results we came up with ten Delaware Wetlands New Year’s Resolutions to help guide our program into the future. Hey, the survey finding might even help inform your program’s activities too. We are excited to get started! 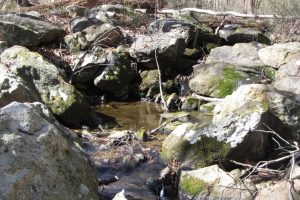 Figure 1a. Spring on a perched floodplain along a tributary of White Clay Creek. a. visual image. Photo Credit: Tom McKenna, UD

Groundwater discharge areas are common hydrologic features in Delaware’s Piedmont Province, located in hilly northern New Castle County. Discharge occurs as springs or seeps. (A seep can be described as simply a spring with discharge through the very small openings between soil or sediment grains. In reality it is a continuum between the two terms). Some are subaqueous features, meaning that groundwater discharges directly to surface water, like a creek. Other seeps and springs are subaerial, so groundwater discharges to the land surface.

Subaerial discharge is often associated with seep or spring wetlands. One unique type of these is the Piedmont Stream Valley Wetlands that are habitats for rare plant species and the federally threatened bog turtle (Bill McAvoy, DNREC). In some places, the springs and seeps are also likely to be conduits for nutrients like nitrogen and phosphorous that result in creeks being “impaired water bodies” (as determined by DNREC and EPA). 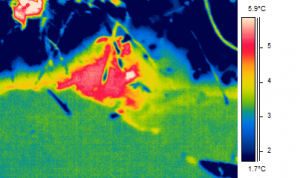 Figure 1b. A thermal image. Spring on a perched floodplain along a tributary of White Clay Creek. Temperatures are “apparent” temperatures as the radiation imaged is a function of the observation angle, reflected temperature from surrounding objects and a property of the object call the emissivity. The temperature for the water is close to the true kinetic temperature as the imager is set to image water with local reflected temperature taken into account. A small wetland (<20 m2) exists downstream of this spring.

Understanding the flow of groundwater that discharges to these creeks and wetlands is difficult because we have a poor knowledge of the distribution of rock fractures that control groundwater flow patterns. The fractured rocks are typically overlain by a 0 to 50-meter-thick regolith that hides the fractures.

One way to gain insight into these groundwater flow systems is to work backward in the groundwater flow system by first locating discharge at seeps and springs (groundwater outcrops*). To address this issue, I am identifying spring and seep locations in the White Clay Creek (Figures 1a and 1b) and other Piedmont watersheds (Figure 4) by conducting walking in-stream surveys with a thermal-imaging camera (Scientifically, it is known as a thermal imaging focal-plane radiometer).

The surveys are typically done on cold mornings in winter between 5 and 10 am. Springs are identified based on the temperature difference between water emanating from the spring (warmer in winter) and the ambient water or land surface (colder in winter). Direct measurements of temperature and specific conductivity are made and GPS coordinates are recorded.

Initial studies clearly indicate that springs are commonly found in the tributaries of White Clay Creek (e.g. higher-order streams), but are not common in the main stem of the White Clay Creek in Delaware and southern Chester County, PA. 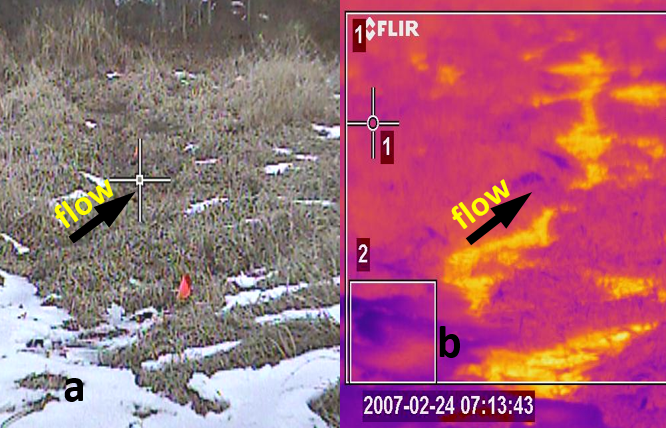 Figure 4. Freshwater Marsh, Brandywine Creek State Park on cold morning in winter This set of images shows how heat can be used as a tracer of hydrologic processes. a. visual image. Water was everywhere under the grass and flow was not visually evident. b. thermal image. Relatively warm water is flowing in very shallow channels obscured by the dense, matted vegetation. The temperature difference between dark purple and yellow colors is about 10 degrees C.

* The mapping of “groundwater outcrops” was developed in Alberta, Canada by József Tóth and Peter MeyBoom in the early 1960s (references below).  The insights gained by Tóth resulted in his classic paper with illustrations published in every hydrogeology textbook.  The paper also earned Tóth the highest award (Meinzer Award) given by the Hydrogeology Division of the Geological Society of America in 1963.  He was the first recipient in 1965.  The technique and term have fallen away in the literature but its validity still holds true.