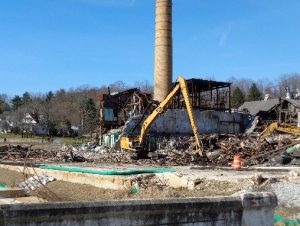 Demolition of buildings at the NVF Yorklyn Site

The National Vulcanized Fiber (NVF) plant located in Yorklyn, Delaware has a rich history with humble beginnings in grist, snuff, lumber, and cotton. By the mid 1800s, production in the valley shifted to paper, and by the early 1900s shifted again to vulcanized fibre. Due to the early success of fibre production, the local Marshall Brothers Company expanded into the National Fibre and Insulation Company and later into the NVF Company. Operations at NVF between 1960 and 2003 were busy. The main mills and the Marshall Brothers Mill were operated 24 hours a day, 7 days a week, moving approximately 40-41 million pounds of material annually. Eventually demand and production slowed, and by 2008 the staffing and traffic of the mills had reduced to about ¼ of the totals from the height of the company. By 2009, the NVF Company had declared bankruptcy and shut down the facility for good.

At the same time that NVF operations were winding down, the Department of Natural Resources and Environmental Control’s (DNREC) Division of Parks and Recreation (Parks) was acquiring land in and around the valley. By the end of 2008, Parks was managing 192 acres of valuable conservation and cultural resource lands known as Auburn Heights Preserve (which also includes the original Marshall family mansion and its steam car museum) and another 121 acres known as the Oversee Farm. Between the two areas of conservation land, and adjacent to the Red Clay Creek, was the former NVF Company plant. Here’s where things get interesting…

Working as a unit, DNREC put together a multi-divisional working group that began to secure the site and gather information about environmental conditions at the site. DNREC Parks worked with a private investment group to acquire the 119 acres of NVF Company land from the Bankruptcy Trustee, and soon after negotiated rights to various parcels for future Park related development and connection of existing Park amenities. Through this unique partnership, DNREC assumed responsibility for the assessment and environmental cleanup of the former plant properties, while the private developer took responsibility for all asbestos abatement and demolition of existing unwanted structures. 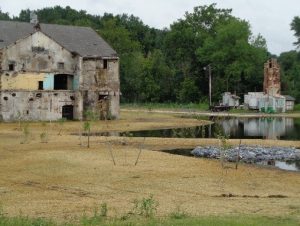 Fast forward to August 2017. All of the structures that will not be redeveloped have been demolished. The feasibility study conducted to determine the best cleanup options for contaminated portions of the property has been, more or less, implemented and completed. Aside from the continuously operating groundwater remediation system that keeps dissolved zinc in groundwater from entering the Red Clay Creek, the most aggressive and costly portion of site remediation entailed zinc source removal (from soil) and creation of a 2-acre wetland to serve as flood water storage capacity.

During the excavation project, over 170 tons (340,000 pounds) of zinc was removed from the soil beneath the former manufacturing facility. In addition, between 500 and 700 pounds of zinc are recovered monthly from the groundwater through the operation of the treatment system.

The majority of non-permeable surfaces have been removed from the site to foster better drainage, and more wetland projects are planned on DNREC owned properties in the valley for additional flood water storage capacity. Finally, pervious paving materials will be used in all roads and parking lots associated with future site redevelopment.

Hazardous Substance Cleanup Act (HSCA) funds have supported approximately $4.5M of the assessment and cleanup efforts, with another $3M on loan from the Clean Water Loan Fund for the zinc source removal/floor mitigation wetland project. Additional State funding is provided to DNREC Parks for ongoing development of trails and other area amenities. At this point in time, the former plant site is ready for additional development, both commercial and/or residential.

Moving forward, the Wilmington and Western Railroad steam train will continue to run through the valley as it always has, but a new turntable and a train station will be added to the former NVF Company property to improve public access to services and amenities. Miles of hiking trail will be accessible from this centralized location, including three historic bridges that will cross the Red Clay Creek within the valley. 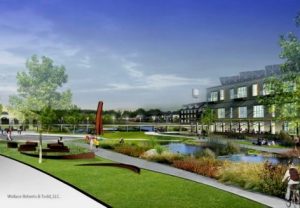 An outdoor amphitheater is planned to serve the Delaware Symphony Orchestra as their summer concert home, and residential redevelopment is being planned for one of the former mill building sites (including a stream restoration project along Yorklyn Road).

Public water and sewer are currently being extended to the site to support these and other amenities, including restaurants and shops, that will inevitably follow as the realization of this unprecedented partnership between public and private entities for renewal and revitalization of the Auburn Heights/Yorklyn Valley area are realized.