Dinophysis acuminata: a dinoflagellate you should know

What is a dinoflagellate? 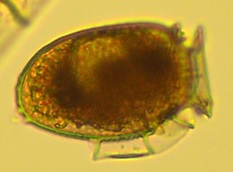 Dinoflagellates are a group of microscopic, mostly unicellular aquatic protists that are members of the plankton community. They live in fresh and marine waters, spanning the tropics to the arctic. Fossil records of dinoflagellates exist that are hundreds of millions of years old, so they have had some serious time evolving to their environments and the diversity of adaptations within the group showcases that.

Dinoflagellates are defined by two whip-like appendages they use to move called flagella. One wraps around the body for propulsion and the other extends out from the body for steering. The “brain-like” organelle of the dinoflagellate cell, the nucleus, is relatively large compared to those found in other unicellular creatures and looks like a human fingerprint. Dinoflagellates have a distinguishable cell covering known as a theca that is either “naked” for some or covered in an armor of cellulose in others.

Most are benign and mind their own business floating around providing food and oxygen to all, but some have the bonus of an ability to produce toxins. Toxin production in dinoflagellates is thought to be a means of avoiding predation and can be so potent they can cause illness in humans. This is an area our Dinophysis makes its debut.

Why study the Dinophysis acuminata dinoflagellate?

The genus Dinophysis consists of more than 100 species and they are too small to see without a microscope; 165 Dinophysis acuminata (D.a.) cells lined up “top to bottom” can fit across the diameter of your trusty #2 pencil eraser. In the 1970s another member of this genus, Dinophysis fortii, was identified as the culprit for sickness linked to contaminated shellfish in Japan through its production of toxins: okadaic acid and derivatives. The shellfish beds had to be shut down to harvests and this invisible miscreant has become a specimen of study almost everywhere.

In 2008, Texas experienced a similar situation Japan had, and the culprit that time was D.a. The economic hit communities take by closing recreational shellfish harvesting sites even for a season can lead to millions of lost dollars in lost venue. Areas with shellfish aquaculture industries are especially vulnerable and closures could lead to economic collapse for some areas reliant on the seasonal consumption of shellfish by tourists and national or worldwide sales.

2016 DSP World Map from the US National Office for Harmful Algae Blooms https://hab.whoi.edu/maps/regions-world-distribution/

The toxins produced by some members of the Dinophysis group lead to an illness known as Diarrhetic Shellfish Poisoning (DSP); can you guess the major symptom of the illness? Diarrhea along with other uncomfortable symptoms (i.e. pain, cramping, vomiting, chills, fever) occurs following consumption of filter feeding shellfish such as mussels, clams, scallops, cockles, and oysters that have accumulated okadaic acid in tissues. DSP toxins also promote tumor growth and may increase gastrointestinal cancer risk in humans with prolonged exposure. DSP toxins are not degraded by cooking and poisoning usually comes on quickly, within 30 minutes to a few hours after consumption and symptoms last 3-4 days. Symptoms can be severe or not and may go unrecognized as DSP poisoning due to the nonspecific symptoms in less severe cases. Aren’t you glad someone is keeping track of these things?

How do I study Dinophysis? 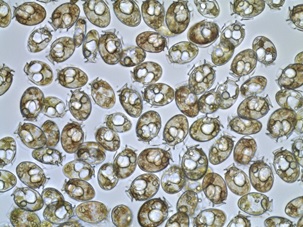 Dinophysis acuminata in culture. (Photo by A. Pappas and A. Williams, 2018)

My study site is in the Delaware Inland Bays, a group of shallow water bodies in south- eastern Delaware, with a flourishing oyster aquaculture industry. Torquay Canal, a dead-end residential canal up in the north- western corner of these bays, is a site with a history of D.a. bloom events. It is important to note this area is closed to shellfish harvest and no aquaculture takes place there.

D.a. is considered a harmful algae bloom (HAB) species. A bloom event of this species occurs when cell densities reach 20,000 cells per liter of water (cells/L) or more. Torquay Canal has had blooms in the millions! Whether a bloom event is harmful or not depends on the species and toxicity. Sometimes, high cell densities can be low in toxins and low cell densities may be high in toxins. Prey consumption, location, and strain all seem to influence toxin production in D.a. Increases in cell densities are known to occur due to increases in nutrient runoff (nitrogen and phosphorus) from land via fertilizers, faulty septics/sewage, and industrial discharge. Changes in wind direction, sunlight, temperature, and prey availability also contribute to increases in cell densities of D.a. Bloom events typically occur for this species at my study site during the spring and summer. I wanted to know if they were still there in the winter.

Some dinoflagellate life cycles involve a stage where the cell can encyst, creating a sort of encapsulation that allows the dinoflagellate to enter a state of dormancy quiescence during times where adequate resources are not in abundance, most often during winter months. These cysts are deposited in sediments, and act as inoculum to can start up future bloom events, and can be carried to other locations through wind and wave action. Whether or not D. acuminata produces cysts is not known; no one has seen one yet. So, I sought to answer, or at least scratch the surface, of a related question: Is D. a. present within the sediments of Torquay Canal during winter months?

I started by collecting sediment and water samples at Torquay Canal every month for two years.  The water samples I took for nitrogen and phosphorus analysis. Every time I sampled, I recorded information about the current water condition, like temperature, dissolved oxygen, pH, and salinity.  Dinoflagellate cells are packed with DNA, so instead of looking for something no one has ever seen, I extracted DNA from sediment samples using a chemistry kit made just for the application.

After I had my DNA, I used a common molecular method called PCR (Polymerase Chain Reaction) to determine if the DNA I extracted belonged to Dinophysis.  Basically, you add DNA to a mixture of enzymes, reagents, and known segments of DNA you can purchase from a laboratory.  The known segments are called primers and they bind to either side of the DNA segment you are attempting to replicate that is unique to the organism you want to determine the presence of.  The mixture is heated up to break the double stranded helix of DNA in two strands and the primers and reagents all do what they naturally do: breaking, binding and copying through the heating and cooling.  The process continues until billions of copies of the DNA segment you are looking for end up in your little test tube or not.  It’s chemistry!

Then comes a trip to the post office to send out the samples to a sequencing lab to make sure you have what you aimed for.  The sequencing lab can determine the amino acid profile of your PCR product so you can check that to a database for accuracy.  Yes, there are databases full of DNA profiles for all kinds of organisms!

I am now analyzing results to determine if there are correlations between the results of the sediment analysis and nitrogen and phosphorus data.  The information obtained through this project will strengthen the harmful algae monitoring program in Delaware and add to the limited knowledge of D. a. within the Delaware Inland Bays.  I am looking forward to the mysteries we will uncover about this amazing creature!

The NOAA LMRCSC provides funding for this project and is supported by the National Oceanic and Atmospheric Administration Educational Partnership Program with Minority Serving.