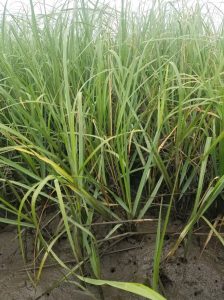 Wetland plants live a tough life. They are often under water for significant periods of time, meaning that they are frequently deprived of oxygen. Wetland plants also need to remain stable in the soil if they deal with fast moving water that ebbs and flows. Those that live in marine or estuarine areas are under even more stress simply because they need to be able to deal with saltwater! So how are wetland plants able to survive and reproduce under these difficult conditions?

Read on to learn about just a handful of the cool adaptations that some of Delaware’s wetland plants have that allow them to thrive in watery—and sometimes salty—habitats!

If you’ve ever seen a saltmarsh in Delaware, then you’ve probably seen saltmarsh cordgrass. It grows in the areas in saltmarshes that are relatively low in elevation, meaning that they are flooded at every high tide (Figure 1). This plant has to deal with saltwater, and lots of it! It is also what’s known as a halophyte, which is a plant that can tolerate saltwater conditions. This grass actually has salt glands so that it can secrete all of the excess salt out (Figure 2). If you look carefully at its leaves, you can sometimes actually see the salt crystal secretions! Some other saltmarsh plants have this ability too, such as spike saltgrass (Distichlis spicata). 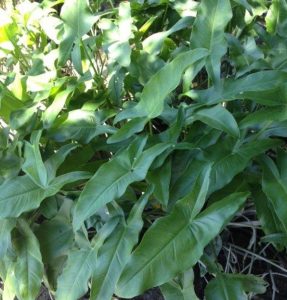 The name of this plant is fitting, because its leaves look like large arrowheads (Figure 3). Arrow arum likes to live in tidal freshwater marshes, lakes, and ponds where the water is shallow. This plant has evolved an interesting and effective way of reproducing while living in the water. The fruits, which look like greenish berries, fall into the water when they are ripe. Once they are in the water, the coating around the fruits swells and eventually bursts. After the coating bursts, the berries are capable of floating on the surface of the water. The berries can then release seeds, which sink to the ground below the water to eventually germinate and grow new plants. Because the berries can float on the water, seeds can disperse for plants to grow in new areas. Arrow arum knows how to work with the water! 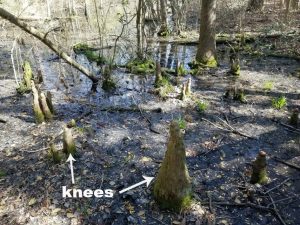 Bald cypress trees are deciduous conifers that grow in swamps and in floodplains along rivers and streams. They are southern trees, so Delaware is the farthest north that they grow naturally! How is it that a big tree can withstand so much water? Well, bald cypress trees have specialized root structures called pneumatophores—commonly called “knees”—that grow vertically out of the ground and water (Figure 4). Scientists believe that these knees help get air to roots that are under water. They might also help stabilize the tree in very watery conditions. A great place to go see bald cypress trees and their cool wetland adaptations in Delaware is Trap Pond State Park! 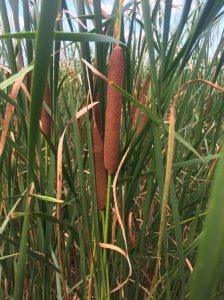 Cattails are one of the most well-known wetland plants because they are widespread and easily recognizable with their brown, “tail-like” flowering structures (Figure 5). There are two species of cattail in Delaware; the broadleaf cattail is native (Typha latifolia), while the narrowleaf cattail (Typha angustifolia) is invasive. Both species are commonly found in marshes, shallow ponds, ditches, and wet meadows.

These areas often have standing water, and cattails have evolved a way to cope with that. Cattails have something called aerenchyma in their leaves, stems, and roots. Aerenchyma are basically open spaces that allow oxygen to travel from the air, to the leaves and shoots, and down to the roots and rhizomes (underground root-like stems) that are underwater. This keeps the parts of the plant that are submerged happy! They also help keep cattails upright in water because they keep the leaves fairly stiff. If you cut a cattail leaf open, you can actually see the aerenchyma in the leaves! Many other herbaceous wetland plants share this same adaptation to survive in wetland environments.

Next time you’re near a wetland, notice the plants and get curious about all of the amazing ways that they have adapted to live in watery conditions. After all, not just any plant can do it!