Just How Shellfish Are Freshwater Mussels? 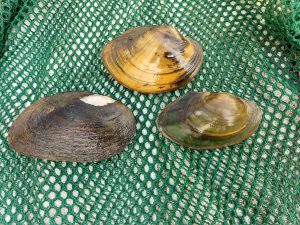 Upon hearing the term “freshwater mussel”, what do you think of? Is it that tasty seafood restaurant that serves them in white wine or steamed with garlic and parsley? If so, you’re probably not alone.

But what if I told you we don’t eat freshwater mussels? This is the typical start to a conversation about those animals with two shells known as bivalve shellfish and the differences between them.

We often lump bivalves into the ‘we like to eat them’ category but that category is only for saltwater animals (e.g. hard clams, steamers, oysters, blue mussels, etc.). And while most of us know and love these salty critters, saltwater shellfish have (inedible) freshwater cousins that live in our freshwater streams and pond, nearly 300 species of them call North America home! 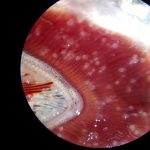 So now that we are clear on which shellfish we are talking about, just how selfish are they? One could say quite a bit considering they make fish carry their babies for them in order to reproduce.In other words, their babies are fish parasites. Talk about only thinking of yourself!

Freshwater mussel reproduction and the fish-mussel relationship can be summarized in a few points: 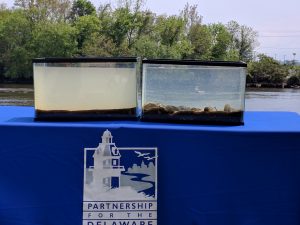 Once settled into the bottom of rivers and lakes, freshwater mussels get to work doing what they do best: filtering water. Just like their saltwater cousins, freshwater mussels are great at eating small particles in the water. This is because most bivalves are uniquely adapted to use their gills to breathe but also collect and eat the nutritious phytoplankton other animals can’t. This ability to filter Earth’s fresh water gives value to our freshwater mussels, even if we can’t enjoy them on the half shell.

So while freshwater mussels parasitize fish gills in order to survive, they return the favor in spades by providing valuable ecosystem services such as filtering the water so it’s cleaner for other plants and animals to enjoy. Perhaps they aren’t so selfish after all…

Learn more about freshwater mussels and how we can help recovery declining populations below!