If you have an interest in Delaware wetlands, chances are you’ve heard about the management challenges and subsequent tidal marsh restoration at Prime Hook NWR, near Milton. For many years, two large areas encompassing about 4000 acres of the refuge were managed as freshwater impoundments.

Beginning in 2006 a series of storms created overwashes and large breaches along the shoreline that separated the managed impoundments from the Delaware Bay, flooding them relentlessly with saltwater. Hurricane Sandy was the final blow to the system, which had suffered rapid peat collapse and widespread conversion to open water.

There were several years of careful discussions and difficult planning as the refuge worked out a long-term strategy to ultimately restore the impounded wetlands to their historic tidal marsh condition. 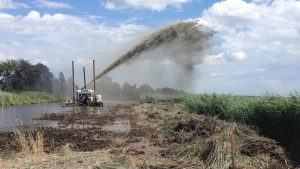 The restoration of the refuge wetlands was made possible by federal money through the Hurricane Sandy Disaster Relief Act, and was the largest tidal marsh restoration project ever in the east. Sand dredged from an offshore borrow area was pumped in to close the large breaches and restore the the dune, beach, and backbarrier along more than 8000 linear feet of shoreline. Nearly 60 acres in the back barrier was planted with Panicum and Spartina grasses. Within the marsh interior, more than 20 miles of tidal channels were dredged, mostly following historic drainage patterns. The dredged material was sprayed onto the adjacent area, providing on-site disposal and giving marsh elevation a boost in those areas.

The Seeds of Success program collected seeds representing a mix of 17 species suited to varying conditions, which were spread from an airplane onto large portions of the mudflats in the marsh interior to give revegetation a boost. The restoration work started in the summer of 2015 and moved at a rapid pace. Although the refuge continues to work with partners such as DelDOT and the DNREC Mosquito Control Section on small hydrological alterations in the marsh, the restoration work was largely completed by summer 2016.

From the Beginning: Developing a plan to track changes in the marsh

As soon as the wetland management challenges began, the refuge formed a critical partnership with the DNREC and the Delaware National Estuarine Research Reserve to begin monitoring water levels and salinity throughout the system, data that was later used in hydrodynamic modeling to guide restoration planning. 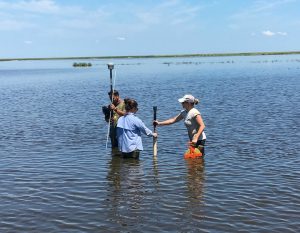 As a plan for marsh restoration came together, this water monitoring network was expanded and became the basis of a comprehensive biological and abiotic restoration monitoring program. The refuge added additional partners to the effort, including the DNREC Wetland Monitoring and Assessment Program, the University of Delaware College of Earth, Ocean, and Environment, and the Saltmarsh Habitat and Avian Research Program (SHARP), also based at the University of Delaware – among others. In the years prior to, during, and immediately following restoration, these partners have worked with the refuge to collect data on everything from vegetation communities and birds to marsh elevation, sediment concentration in the water, and nutrients.

Now that the restoration has been mostly complete for more than a full growing season, some exciting recovery is evident already!

Initial results are in..

Although it may take some time for the bird and fish communities to fully respond, the newly-restored beach immediately attracted horseshoe crabs and even nesting piping plovers, least terns, and American oystercatchers. In 2015, the refuge hosted its first ever piping plover nest, and in 2016 there were 6 nests that successfully fledged 12 young birds.

However, the most dramatic evidence of restoration success so far has been the recovery of tidal marsh vegetation throughout the project area. The USFWS, SHARP team, and DNREC partners have monitored vegetation recovery with a combination of remote sensing analysis, basic ground surveys, and in-depth data collection that includes biomass and elevations. Some highlights from initial post-restoration monitoring results include…

But, it is very basic data collection – photography – that has captured the initial progress in the most compelling way. Although open water still dominates in large sections of the wetlands as marsh recovery continues, the transformation is nothing short of dramatic in many areas, as evident in the comparison photos.

What started as open water in 2015, before restoration began, was transformed into mudflats with colonizing and transitional species in 2016, which then gave way to healthy stands of saltmarsh grasses such as Spartina alterniflora in 2017. Planted areas on the backbarrier quickly filled in with lush stands of Panicum grasses and Spartina patens. The intensive monitoring of the project will continue with the refuge’s team of partners for at least the next 5 years. Stay tuned for future updates!