Prime Hook Then and Now: A Restoration Story 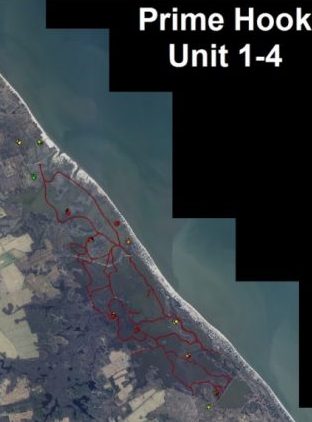 A hot topic for scientists and residents of Milton as of late, has been the Prime Hook National Wildlife Refuge Marsh Restoration project. This Refuge had multiple breaches in its freshwater impoundments where saltwater from the Delaware Bay cut its way through the dunes. The breaches caused significant flooding; massive vegetation die offs, and returned the habitat from its man-made freshwater system to its historic slightly salty brackish system.

To solve these problems, the Prime Hook National Wildlife Refuge took on one of the largest restoration projects in the U.S. in the fall of 2015. The end goal, to create a self-sustaining system and return all the impoundments to a brackish tidally influenced ecosystem. The Refuge closed breaches, created over 20 miles of channels, planted thousands of plants, scattered thousands of seeds by airplane throughout the landscape, and provided design input for DelDOT’s new bridge.

So how will they know if it worked?

That’s where we (the Wetland Monitoring & Assessment Program) come in and help. In the summer of 2015, we provided baseline wetland monitoring before any restoration work had begun. Then, after the Refuge finished this summer we came back to do the first post restoration sampling.

Preliminarily, we have seen some remarkable changes in the landscape.

Two of our assessment points now have a channel flowing through them. This makes it harder to walk around our sites, but should provide some interesting data in the future on channel impacts to a developing wetland. 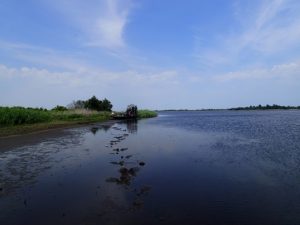 One of the most visually noticeable changes is the lack of water in some of the assessment sites. Sites that were once completely covered with water pre-restoration now appear high and dry post-restoration even though they do not have any significant elevation change.

But, the most promising response to the restoration is the colonization in these open areas with various plant species; Bulrush, Common Rush, Sweetscent, and Marsh Hemp to name a few. Leptochloa fascicularis, Bearded Sprangletop, is a salt tolerant annual that has become more prevent and responded to the new and changing conditions. As expected, the plant communities are changing, and will continue to change and adjust over the next few years. 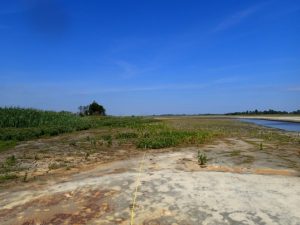 We are just starting to dig into our data, and will continue to monitor the Prime Hook National Wildlife Refuge Marsh restoration for the next three years in the hopes to better understand how wetland restorations change the landscape and return the vital wetland functions that we count on everyday.

What We Looked At – Quick & Dirty: