Did you know that Delaware has multiple species of crayfish? While crayfish may look like small lobsters, they are actually distant cousins. The most differentiating feature is that lobsters live in saltwater, and crayfish, crawfish, crawdads, or whatever you would like to call them, live in fresh to brackish waters. 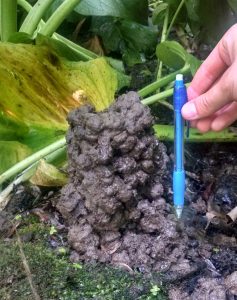 This crayfish chimney is the entrance to the crayfish’s underground tunnels. Depending on the species, there may be multiple chimneys or entrances.

Some crayfish species living in Delaware are naturally occurring here (native), while some come from other parts of the country (invasive), and they all come in various colors and sizes. You are likely to find these crustaceans in flowing streams, lakes, swamps, ponds, and seasonally wet wetland habitats. They live their lives safely burrowed in underground tunnels or hiding out in open water, or some combination of the two. Fun fact, as long as the crayfish’s gills stay moist, it can breathe on land or in the water.

Crayfish are opportunistic feeders using the two antenna on the top of their head to seek out the chemicals that “smell” most tasty to them. They will chow down on decomposing plant or animal parts, slow moving macroinvertebrates such as snails, underwater grasses, amphibians, and fish eggs. Interestingly enough though, juvenile crayfish seem to prefer a diet consisting of mostly meat, while adult crayfish seem content munching away on plant materials.

On the other hand, crayfish also serve as a tasty treat to bass, snapping turtles, raccoons, and herons, and are used as bait by fisherman to catch fish. 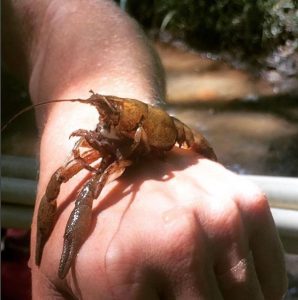 The white river crayfish (Procambarus acutus) is one of a few species that is native to Delaware. They can range in color from pinkish tan to brownish olive and have a broad dark stripe along the abdomen.  The claws are slender and have small dark spots. This particular little guy was found dead.

These hard-shelled critters also have interesting behaviors. To escape a predator, they will try to tail flip themselves away. Don’t think they are wimps though, because they aren’t afraid to get down and dirty. Fighting is commonplace among crayfish, whether it be over food, shelter, or selecting the perfect mate. They box, push, grasp, and grab at their opponent until one submits or loses a limb.

But, how does one crayfish know when the other has submitted? Crayfish have developed body language and chemical signals that let their opponent know when they’ve given up. If a crayfish lays its body flat against the ground with its claws forward, or if it does a tail flip and propels itself backwards, it has submitted and the battle is over. 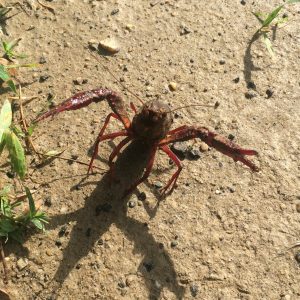 This invasive species of crayfish, the red swamp crayfish (Procambarus clarkii), is found in Delaware.

Crayfish behaviors can vary by species, especially when it comes down to aggression. For example, the red swamp crayfish (Procambarus clarkii) is known for its very aggressive behavior and delicious taste, and it just so happens to be an invasive species right here in Delaware. It uses its aggressive behavior to out-compete native species of crayfish and amphibians for shelter and food.

Native to the U.S.’s Gulf Coast, the red swamp crayfish made its way to Delaware through people releasing or disposing them as unwanted food, pets, or bait. One paper from Indiana hypothesized that flushing crayfish down the toilet was an inappropriate way to dispose of them because they were being found around waste water treatment facilities, “having apparently survived treatment.”

Long story short, crayfish are cool, but the invasive species are bad, and never flush unwanted animals—including crayfish– down the toilet because you never know where they might end up (or what they might turn into).

Red Swamp Crayfish Identification:
• Tolerates a range of salinities and pollution
• Can grow up to 5 inches long
• Dark red in color
• Raised bright red spots on claws and body
• Juveniles are not red and can be difficult to identify
• Have an approximate two year life span in the wild
• If you see one, please report it to the Delaware Division of Fish and Wildlife at 302-735-8655