Wetlands are more than just a beautiful photo opportunity. If you are a reader of this blog, you are probably aware that tidal wetlands can protect shorelines from storm surge, reduce nutrients, and provide habitat for critters like shellfish, crabs, and fish. These benefits are collectively known as ecosystem services. Recently, there is another ecosystem service that has been gaining interest from wetland scientists, coastal resources managers, and policy-makers alike – the ability for tidal wetlands to trap and store carbon! 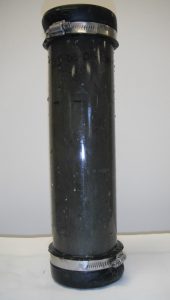 Tidal wetlands can store mass amounts of carbon within its thick layers of sediment. Plants, including Spartina alterinflora, take in atmospheric carbon dioxide during photosynthesis and turn it into part of their cellular structure. When these marsh plants die, that carbon can be buried into the marsh sediment where it can stay trapped as organic matter for millennia. Organic matter can also be deposited onto a marsh by tides and water coming off from land. This process of carbon going from the atmosphere into marsh plants and sediments is called carbon sequestration.

One key feature of a tidal marsh is its ability to accrete, or be able to vertically build-up sediment to keep pace with local sea level changes. As this layer of marsh sediment gets deeper and deeper, it becomes harder for this trapped carbon to get released back into the atmosphere. Thus, marshes can be a sink for carbon dioxide!

This storage of carbon within tidal wetland ecosystems has earned the name blue carbon. Impressively, tidal wetlands can store more carbon per area than a forest because of its deep layers of mud – measured as deep as 32 feet in Belize. And that carbon in a tidal wetland can be stored for 1000’s of years while systems like a rainforest store carbon for shorter periods, such as decades to centuries. This makes blue carbon an important component of the global carbon cycle. 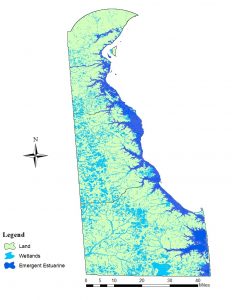 Approximately 23% of Delaware’s wetlands are emergent estuarine, which equates to about 73,000 acres.

Healthy marshes will continue to trap and store carbon, in addition to providing valuable habitat, protection from storms, and natural filtration of nutrients. However, when marshes are lost or degraded, that carbon storage benefit is lost – and even more, that previously stored carbon can be released back into the environment. The protection and restoration of wetlands is a great way to help continue carbon sequestration and storage within tidal wetlands.

So just how much carbon is sequestered each year within Delaware’s approximately 73,000 acres of tidal wetlands? This past summer, DNREC-Delaware Coastal Programs hosted Bryce Stevenosky, a DENIN intern from the University of Delaware, to help us understand this question using published scientific literature. While this is just a back-of-the-envelope type of estimate, it starts to put the amount of blue carbon into perspective for Delaware’s wetland scientists.

This estimate is just the beginning for Delaware’s coastal resources managers and scientists to understand the role wetlands play in storing carbon dioxide, and what we could stand to lose if wetlands are lost. More work needs to be done in Delaware to understand these complex processes and put a site-by-site specific value on just how much carbon Delaware’s tidal wetlands are trapping for us.