Boaters, kayakers, and bird watchers are drawn to salt marshes for their quiet beauty. Wildlife, ranging from great blue herons to tiny fiddler crabs, and marsh grasses rustling in the soothing breeze, all draw recreators to these coastal systems. But did you know, these seemingly tranquil systems are hard at work providing valuable ecosystem services? 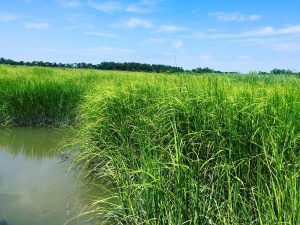 A tidal wetland in the Delaware Estuary.

An ecosystem service is a natural process that contributes directly or indirectly to the well-being of the human population¹. Salt marshes provide many ecosystem services. Some of these services include coastal protection from storm events, water filtration, and nursery habitat for economically important fish species. Additionally, scientists increasingly recognize salt marshes for their role in removing carbon from the atmosphere and storing it long-term in their soils. That process is called carbon sequestration.

All these valuable services are provided by the marsh free of charge!

Why is Carbon Sequestration Important?

Carbon dioxide is a major contributor to global climate change because it functions as a greenhouse gas. Greenhouse gases trap heat in our atmosphere, much like a garden greenhouse does. Consequently, these gases warm up our planet at an unnatural pace. This process results in what is commonly referred to as global warming, and, in turn, global climate change (a shift in climate as a result of warmer temperatures). Unfortunately, all of us are releasing carbon dioxide into the atmosphere by doing daily activities like driving our cars and heating/cooling our homes.

While we humans are putting carbon dioxide into the atmosphere, salt marshes are working hard to remove it!

Carbon sequestration is a valuable ecosystem service, naturally removing carbon from the atmosphere and locking it away in plant material for generations. While many ecosystems can sequester carbon, salt marshes have proven to be the experts. Salt marshes can sequester carbon at rates 10 times higher than other terrestrial wetland systems². Less carbon in the atmosphere means less greenhouse gases, and, ultimately, reduced global warming.

How do Salt Marshes Sequester Carbon? 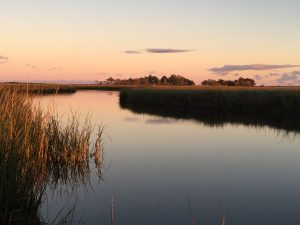 1. Salt marsh plants need sunlight, water, and carbon dioxide to grow. This process is called photosynthesis. The carbon absorbed during photosynthesis is stored in the plant matter.

2. Over time, marsh plants will die and their plant matter, still full of carbon, will build up on the marsh surface. While some of this plant material will be decomposed by microbes in the marsh, a portion will remain.

4. These suspended sediments will bury the plant material (from step 2) as well as the carbon stored within it, and elevate the marsh surface.

5. Slow, natural sea level rise allows the marsh to gain elevation at a pace that can keep up. This cycle has continued over millennia to form deep carbon deposits.

Over thousands of years, this cycle has formed carbon-rich deposits reaching six meters in depth³. The rates of salt marsh carbon sequestration may vary by region due to factors like the length of the plant growing season and the amount of suspended sediments deposited on the marsh surface. Regardless of the pace of carbon sequestration, salt marshes are worth protecting for this important ecosystem service.

Why Should I care about Carbon Sequestration?

It is often challenging to convince non-salt marsh lovers of the importance of these systems. To many, salt marshes are buggy and muddy areas with no real use. Defining ecosystem services–in particular, their monetary value–helps people understand their importance.

The Social Cost of Carbon

Therefore, some economists have dedicated their careers to estimating the monetary value of ecosystem services. They have developed the social cost of carbon as a way to measure the monetary value of carbon sequestration in salt marshes. The social cost of carbon is the sum of all the costs of one additional ton of carbon dioxide being emitted into the atmosphere. Some of these costs may include more severe storms and wildfires, which destroy communities and reduced agricultural yields straining our food supply. The exact value may vary due to different assumptions and uncertainties about the impacts of climate change in the future (click here for more information). 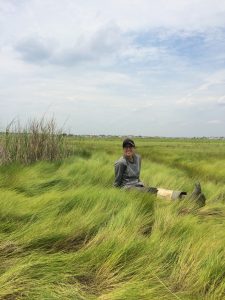 Me doing fieldwork in a salt marsh in the Delaware Estuary.

This basic monetary valuation, in this case just for a single ecosystem service, helps provide context to an otherwise complex natural process.

Accelerated sea level rise is a serious threat the salt marshes. Marshes unable to gain elevation at a pace that keeps up will drown and erode away. That, in turn, would cause large carbon deposits to be released back into the environment, contributing, once again, to global climate change.

Living shorelines, beneficial reuse of dredge material, and other restoration projects are essential to protecting marshes, and the large amounts of carbon stored within them, from accelerated sea level rise. Valuing carbon sequestration and other ecosystem services may help land managers and practitioners gain funding and support for these types of conservation efforts. Additionally, understanding the value of carbon sequestration, and the many other ecosystem services, may help conservationists discourage the development of retail and housing on these valuable landscapes.