There are so many charismatic animals that make Delaware waterways their home. Most people living in Delaware can easily recognize a few of the most popular species: bald eagles, osprey, blue crabs, horseshoe crabs, beavers, river otters, and many more. But there are many more animals living below the water’s surface that are incredibly important to the area’s ecology. One of these lesser known animals are the freshwater mussels. 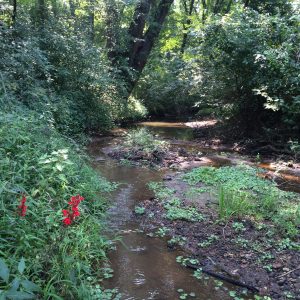 Mussel habitat in the Blackbird Forest

Where do they live?

Freshwater mussels are bivalve mollusks that live along the bottom of rivers, streams, and lakes in softer substrates like sand. They can live for a very long time and, in a healthy environment, some species can live to be 100 years old!

North America is also home to the most species of freshwater mussels in the world. Around 300 species live here. Worldwide, there are about 1,000 species. So, we are home to almost 1/3 of the world’s species. Most of those are found east of the Mississippi River, too.

Freshwater mussels have an unusual life cycle. Before they settle and become the slow-moving bottom dwellers we all picture, they are very mobile and hitch rides on the gills of various fish. For the first portion of their lives, they’re parasites.

Female mussels internally fertilize their eggs with the sperm of nearby males. Once fertilized, she releases the larvae (called glochidia) as migrating fish pass by. The glochidia are attached to the fish’s gills until they are large enough to survive on the stream bottom, which may be far away from their parents since fish can travel great distances and against currents. Mussels depend on these fish and each mussel species relies on different fish species to host their young.

Can I eat them?

Interestingly, freshwater mussels aren’t eaten by humans, like their saltwater relatives. Native Americans used to supplement their diets with mussels, but nowadays we have many more protein options. Freshwater mussels aren’t as tasty as their saltwater counterparts and can often be full of pollutants and/or parasites that have bioaccumulated over their lifetime of filter feeding.

Most species are also classified as endangered or threatened and cannot be collected. Instead, they are eaten by raccoons, muskrats, river otters, fish, and turtles. But they serve a much more important ecological function than just being food.

What do they do all day?

Mussels are incredibly efficient water filters! A single mussel can filter through approximately 20 gallons of water per day. Why do they filter so much water? Mussels are filter feeders and comb the water for food, such as algae, bacteria, and small, microscopic plankton. While doing so, they reduce the amount of sediment and other nutrients in the water.

Even though they are such productive water filters, freshwater mussels are very sensitive to the quality of their environment. They cannot survive in waters that are heavily polluted or in areas with erosion and sedimentation issues. Thus, mussels are more likely to be found in cleaner waterways that are not overwhelmed by pollution, runoff, or erosion.

How are they doing?

Due to many factors, freshwater mussel populations have been declining, and approximately 70-80% of North American species are considered endangered. They are threatened by poor water quality and reduced access to their fish hosts. Dams prevent fish from traveling upstream, so some mussel populations have been effectively cut off since without hosts young mussels wouldn’t be able to survive in the water column.

But even if their hosts are available, the areas suitable for mussel survival are scarce. So once they detach from the host’s gills, they can’t survive in those areas. Mussels have also been affected by invasive species, such as zebra mussels and Asian clams. These invasives tend to reproduce quickly and overpower local mussel populations.

What’s being done about freshwater mussels and their decline?

A LOT! Various nonprofit organizations and state agencies, such as our program within DNREC, have been actively trying to monitor mussel populations and improve local water quality.

The Partnership for the Delaware Estuary (PDE) has an extensive program in place to try to monitor and restore native mussel populations to the Delaware River, Susquehanna River, and their tributaries. PDE plans to open a freshwater mussel hatchery in southwest Philadelphia in 2023. The hatchery aims to produce 500,000 mussels per year to reestablish populations.

Additionally, dams in Delaware are slowly being removed and allowing fish to freely migrate through waterways, which will reconnect isolated populations and introduce glochidia to new areas.

Even with all of those programs and actions in place, native freshwater mussel populations will take a long time to recover, especially species that grow slowly. So we have to try to expedite their recovery by improving water quality as soon as possible!

What can I do to help?