Keeping an Eye on the Rising Tide: SSIM

Coastal wetlands are a hallmark feature of the Delaware’s Bayshore, making up about 23% of all wetland types in the state. Because of the many beneficial services these wetlands provide, such as wave energy reduction, the survival of coastal wetlands is an important part of protecting our seaside communities from threats associated with the changing climate. 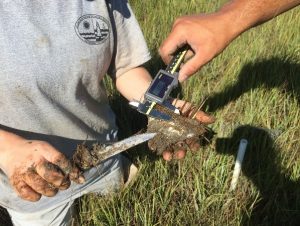 Measuring the amount of sediment on top of a feldspar (a type of clay) marker for a SSIM site.

We here at DNREC’s Wetland Monitoring & Assessment Program (WMAP) are doing our part to track changes in coastal marshes with the long-term monitoring of fixed sites in the Christina and Broadkill watersheds.

To do this, we’ve joined in on the Mid-Atlantic Coastal Wetland Assessment (MACWA) method by maintaining Site Specific Intensive Monitoring sites, also called SSIM (pronounced sim). This monitoring effort establishes fixed stations in coastal marshes and looks at a couple of different factors including water quality, soil quality, plant community, and marsh surface characteristics to help determine if that marsh is capable of keeping up with sea level rise. 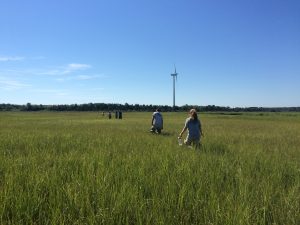 Scientists from WMAP and PDE walking out to SSIM field site to begin monitoring efforts.

There are currently seven fully established SSIM stations in the Delaware Bay Estuary network with two of them residing right here in the little state we call home, Delaware. Two or three times a year, three to four scientists (or scientists in training) slide on their hip boots, head out to the marshes and gather data.

The first SSIM site was installed in Delaware in 2010 on the Christina River in the Russell Peterson Urban Wildlife Refuge. This site is a freshwater site that is impacted by both the past and current chemical industry and from marsh fragmentation caused by the construction of highways in the 1960’s.

The second site in Delaware is located in the Great Marsh Preserve along Canary Creek, an offshoot of the Broadkill River, in Lewes and was installed in 2014. This station is the most downstream location out of the seven in the Delaware Bay Estuary and has the saltiest water of all of the sites because of its proximity to the Atlantic Ocean. The surrounding landscape of this area is agricultural, with some housing communities. Like most salt marshes along the east coast, these areas were historically ditched for mosquito population control.

With each passing year we gather more and more data at these two SSIM sites that will help us understand more about our marshes’ ability to keep up with sea level rise. Be on the lookout for future updates about this project!

This project is done in partnership with the Partnership for the Delaware Estuary (PDE).