The Bog Turtle: a Sun-Loving Harbinger of Spring 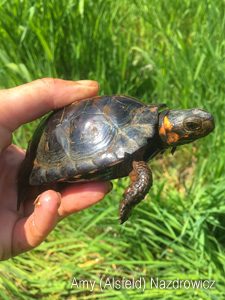 As residents of the Delmarva Peninsula, we are blessed with a high diversity of herpetofauna, (reptiles and amphibians), in part because of our landscape position which transitions between two physiographic regions: the coastal plain in its southern and central portions to the piedmont in the north. And no place showcases our herpetological diversity as our wetlands in springtime!

Whether you reside in the piedmont or coastal plain, the wetlands of the Delmarva Peninsula are a special place in the spring when the water tables tend to be at their highest and our herp species are becoming more active.

The raucous calls of our early breeding frogs, the Spring Peeper, Wood Frog, and New Jersey Chorus Frog, are a promise of the quickly approaching spring and the much appreciated sunshine that comes along with it. 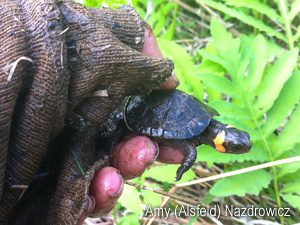 But it’s a quieter harbinger that is an especially welcome sign of spring and lover of sunshine. The rare and beautiful Bog Turtle emerges along with the vegetation from a winter spent hibernating down in the muck or in subterranean tunnels surrounded by slowly flowing groundwater that provides protection from freezing. It is within a handful of our northern spring-fed wet meadows that the warm spring sunshine entices the Bog Turtle up to the surface to bask and prepare for breeding. I was once lucky enough to watch a male Bog Turtle emerge from a tunnel entrance among the roots of an Alder and blink into the sun, completely caked in mud accumulated during his winter hibernation. That was in early April but I have found Bog Turtles near the surface as early as March 20. 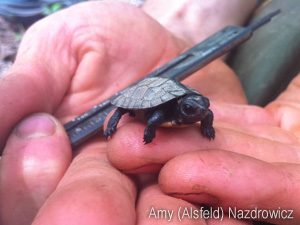 The Bog Turtles’ need for plenty of sunshine continues beyond the springtime into their breeding season where mating occurs on the wetland surface from approximately mid-April through mid-June. The summer sun remains important to gravid females during gestation and they lay their eggs in peak summer atop plant tussocks to fully absorb the sunshine.
Averaging only 3-4 inches in length, an adult Bog Turtle can fit into the palm of your hand. The hatchlings, breaking out of their eggs in late summer or early fall, are no larger than the size of a quarter.

Small, dark, and masters of camouflage, the only conspicuous identifying characteristic of a Bog Turtle is a sunny splash of yellow-orange coloration on each side of the head.

As plenty of sunshine is an important habitat component, crucial Bog Turtle habitat includes open, emergent wetlands with little to no tree canopy. And, as the Bog Turtle and their habitat are federally protected under the Endangered Species Act, Bog Turtle wetlands must sometimes be actively managed to keep ecological succession at bay and to maximize the sunlight reaching the wetland surface.

After a long winter, it is safe to say that humans and Bog Turtles alike are looking forward to the return of the springtime sunshine! Happy Spring and have fun exploring the wetlands of Delmarva!

Amy (Alsfeld) Nazdrowicz is an Environmental Scientist with Landmark Science & Engineering, a civil engineering firm providing civil/site design, surveying, GIS, and environmental consulting services. As a Recognized Qualified Bog Turtle Surveyor certified in Delaware, Maryland, and Pennsylvania, Amy and her Bog Turtle team conduct Phase I, II, and III Bog Turtle Investigations, as well as radio telemetry and other Bog Turtle monitoring services, throughout the region. Amy works from Landmark’s corporate headquarters in New Castle, DE and can be reached by phone at 302-323-9377 ext. 145, or by e-mail at amyn@landmark-se.com. Visit Landmark’s website for more information and services.