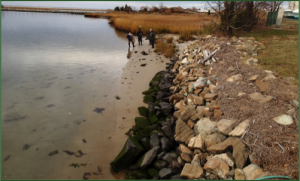 A “Living Shoreline” is a method of bank stabilization that reinforces the shoreline to protect coastal properties from erosion, while also restoring and enhancing fish and wildlife habitat. Unlike bulkheads and revetments, living shorelines use natural materials to maintain existing connections between the shoreline and aquatic areas. A number of living shoreline materials and tactics are available, including coconut fiber logs, recycled shell, and native wetland vegetation. Living shorelines have been built throughout coastal regions and are a popular option for bank stabilization because they protect property from erosion while attracting fish and shellfish, filtering stormwater, and absorbing wave energy during storms.

Two uniquely different shorelines were restored at the Indian River Marina in Rehoboth Beach, DE. The “marsh” restoration site was constructed to address an undercut and deteriorating existing salt marsh shoreline. The “rip rap” restoration site was built along a sandy shoreline as an option for “greening-up” an existing rip rap structure. Both sites are exposed to low wave energy, so standard vegetated living shoreline tactics were selected. Shorelines subject to high wave energy may require marsh sills or offshore breakwaters but should only be used when necessary. 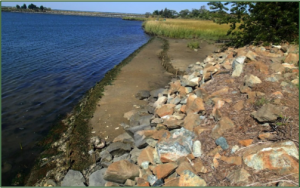 Coconut fiber matting and logs were positioned in the intertidal zone before being staked down tied in place. Oyster shell bags were then arranged in front of the coir logs to further armor the shoreline and absorb wave energy. Following installation, clean sand fill was brought to the restoration sites and graded to the desired elevation and slope before planting with Smooth Cordgrass (Spartina alterniflora).

Both living shoreline projects were installed on April 14-17, 2014. While many shorelines will naturally collect sediment, after 2 months of monitoring this area approximately 45 yd3 of clean sand was used to grade the shorelines to the optimal growing elevation for Smooth Cordgrass. Sites were be planted in March 2015 with Smooth Cordgrass. Spring planting allows vegetation to take root throughout the growing season before winter storms.

Living shorelines may need slight augmentation over the years. However, successful projects throughout the Mid-Atlantic have survived multiple hurricanes! 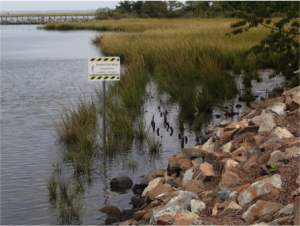 This project was collaboration between Delaware Department of Natural Resources, Partnership for the Delaware Estuary and Delaware Center for the Inland Bays.