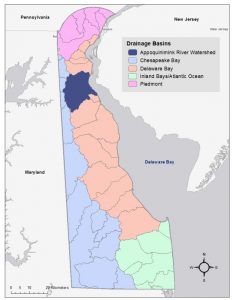 The Appoquinimink River watershed is highlighted in dark purple.

Back in 2016, you were introduced to Delaware’s Appoquinimink River watershed and the types of stressors that we were looking for in our wetland health assessments. At that point, we had recently wrapped up our field work in that watershed, but we hadn’t yet completed any data analysis. We promised to keep you updated within the next couple of years with the results of all that tough work….and here, we deliver!

How did the watershed do overall?

The final count of wetland sites that we assessed turned out to be 30 estuarine wetlands (salt or brackish marshes), 31 flats, 36 riverine wetlands, and 27 depressions. With all four of those wetland types combined, the Appoquinimink River watershed’s wetlands were in fair condition—better than some watersheds, but worse than others.

Most of its wetlands were considered moderately stressed (49%), but quite a few were categorized as minimally stressed (34%), with the smallest proportion being severely stressed (17%). This meant that the wetlands in this watershed received a final overall letter grade of C+. 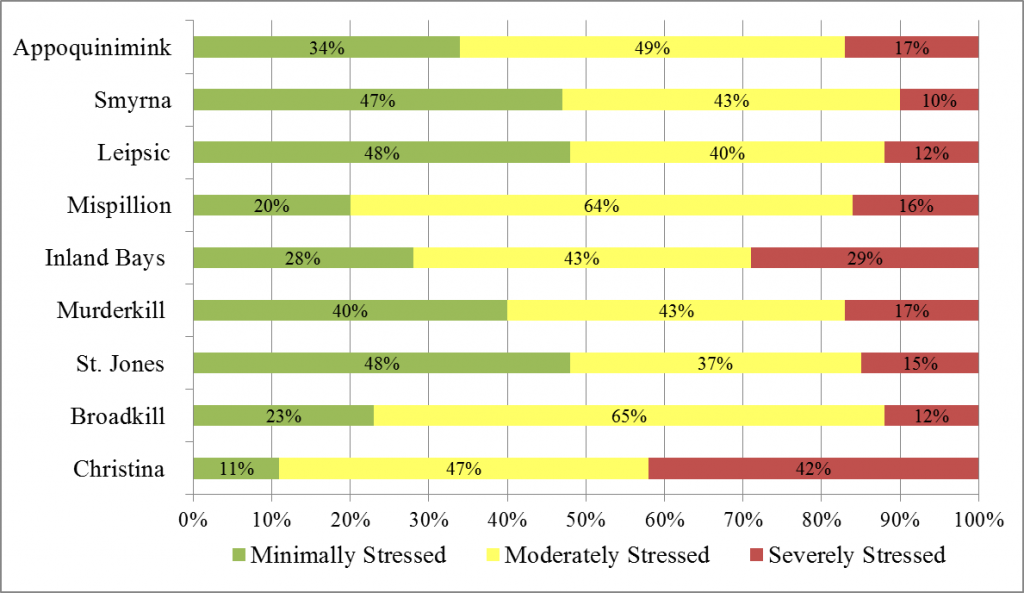 The Appoquinimink River watershed’s wetlands as they compare to the overall condition of 8 other previously assessed watersheds in Delaware. Each bar represents the percentage of minimally, moderately, and severely stressed wetlands in each Delaware watershed.

What about the health of our different wetland types? 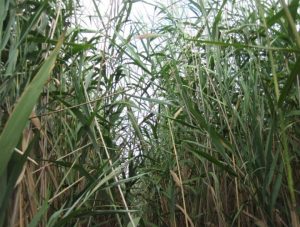 Breaking it down by wetland type, estuarine wetlands received the lowest letter grade of C. Their hydrology was in excellent condition, meaning that the water moved the way it should over the land. They remarkably lacked ditches, which are common in Delaware’s salt and brackish marshes.

However, their buffers (the land area around the wetland) contained some disturbances, and often lacked continuous forests or natural areas. These buffer stressors could introduce polluted water runoff into wetlands or decrease the amount of important wildlife habitat available to migrating animals.

Habitat refers to the status and condition of the plant communities and any roads within the wetland, and in this watershed it was in very poor condition. This is largely because of invasive plants, low marsh stability, and low vegetation thickness, all of which could be signs of marsh decline.

Non-tidal freshwater wetlands (flat, riverine, depression) were a bit of a different story. They were in better overall condition than estuarine wetlands: Flats received a B-, riverine wetlands, a B, and depressions, a B. 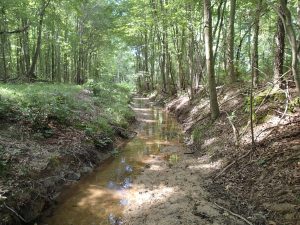 Ditching through a flat wetland in the Appoquinimink watershed.

Habitat and hydrology were in great condition overall for these non-tidal wetlands! Unfortunately, invasive plants were still detected in some wetlands, and ditching was present in some flats and depressions. Invasive plants can rapidly spread and displace native species, while ditching often reduces the water levels in wetlands creating an area that is not survivable for many animals and plants.

However, the main issues for all three of these freshwater wetland types were buffer stressors (problems in the land area around the wetland), as all of these wetlands scored very poorly for their buffers. Common buffer stressors for these wetland types included development, roads, and agriculture in the landscapes. These problems could increase unintentional impacts to non-tidal wetlands, such as polluted water runoff or reduced nearby wildlife habitat.

How has wetland acreage changed in the watershed?

We estimated that approximately 1,972 acres of wetlands have been lost in the Appoquinimink River watershed in the time period from the early 1700’s (human settlement of the area) to 2007. These wetlands were lost mostly because of human impacts such as residential and commercial development, roads, and agriculture. That’s a lot of wetlands!

The watershed has actually gained some wetlands in recent years too (290 acres from 1992 to 2007), but nearly all of the gained acreage is from the creation of ponds that are associated with development, roads, or golf courses. Such unnatural wetlands often lack plants and do not function as well as natural wetlands, so they by no means replace natural wetlands.

Additionally, some estuarine marshes along the coast of the Delaware Bay have become submerged and lost under water because of rising sea levels.

What can I do to help Appoquinimink wetlands? 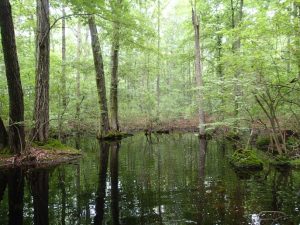 A beautiful water-filled depression wetland in the Appoquinimink River watershed.

Fortunately, now that we have assessed wetlands in the Appoquinimink River watershed, we know what the significant threats are. This allows us to come up with solutions, and we need your help to accomplish them! Here are some ways you can help:

To find out if you live in the Appoquinimink River watershed, visit Find Your Watershed Address. And, to see if you have wetlands on your property and more ways that you can help, visit the Freshwater Wetland Toolbox.

Where can I read the full Appoquinimink River watershed report?

The full scientific report and the shorter, reader-friendly report card for the Appoquinimink River watershed are both in their final editing stages, and will soon be publicly available on the WMAP wetland health website! There, you can also view and download reports and report cards from all other watersheds that have been assessed and analyzed to date.  Data for the tidal and non-tidal assessments can also be found on the Delaware Open Data Portal.