The Secrets of Wintering Wetland Wildlife

In the spring and summertime, Delaware’s wetlands are teeming with wildlife. Frogs and toads are heard in chorus, calling for mates; turtles are observed slowly walking through the woods or basking on logs and rocks in the water; snakes are seen slithering across mosses or trees. But by late fall, many of these fascinating creatures seemingly disappear, making winter wetlands seem relatively quiet and still. Have you ever wondered where the reptiles and amphibians go when the days get short and cold, and how they survive freezing temperatures?

In the winter, many of these wetland animals undergo a process known as brumation. During brumation, animals will substantially lower their heart rates, activity levels, body temperatures, and metabolisms. Because their energy demands become so low in this state, they do not eat and barely breathe at all! However, some animals in brumation may still show some movement, particularly during warmer spells. This is why they are said to brumate, not hibernate, as hibernating animals typically do not wake or move around in the middle of their sleeping period. The place where they spend the winter is called a hibernaculum.

Many of these wetland creatures handle brumation a bit differently—read on to find out more!

Delaware’s wetlands are home to many aquatic turtles, such as the Northern diamond-backed terrapin (Malaclemys terrapin terrapin) and the Eastern painted turtle (Chrysemys picta picta), as well as many terrestrial turtles, such as the Eastern box turtle (Terrapene carolina carolina) and the spotted turtle (Clemmys guttata). As winter approaches, aquatic turtles usually bury themselves in mud or under banks of water bodies to brumate, while terrestrial turtles typically go underground in burrows.

Hatchlings of some species may spend the winter within the nest where they were born. Because they are often under water or fully buried, they are unable to get a lot of oxygen. The oxygen the turtles do need comes from the few breaths they do take as well as from stored energy within their bodies. Unfortunately, this breakdown of stored energy without much oxygen can create harmful compounds within the body, such as lactic acid. Some turtles, though, such as Eastern painted turtles, have the really cool ability to neutralize the acid using the calcium carbonate in their shells¹! 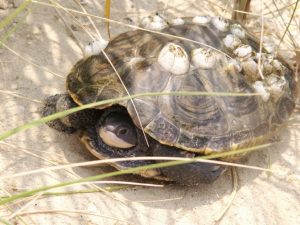 Because turtles usually bury themselves, they are often able to escape contact with snow and ice. However, sometimes ice crystals can form in their overwintering spaces, creating a heightened risk of freezing. Turtles have an awesome way of dealing with this. Some species, such as the diamond-backed terrapin, are freeze-tolerant, meaning that they can still live for a certain amount of time even if some of their body fluids have frozen.

Other species use a strategy known as supercooling, where body fluids remain unfrozen up to a certain point even when the temperature has dropped below the freezing point². Once the days start to get longer and the temperature is consistently higher, the light and warmth act like biological alarm clocks; the turtles will know that spring has sprung and that it’s time to come out.

Much like turtles, frog species that spend a lot of their time in water, such as the Southern leopard frog (Rana sphenocephala utricularia) and the American bullfrog (Rana catesbeiana), will overwinter underwater. These frogs live off of extra energy stores within their bodies that they built up specifically for the winter months.

When dissolved oxygen levels in the water drop, overwintering frogs are faced with a serious challenge, as they cannot survive more than a few days without the right amount of oxygen present. If such a challenge occurs, some frogs have the capability of sensing it and can undergo what is called behavioral hypothermia. In other words, the frogs will actually move to colder water in order to further lower their metabolism, which ends up increasing the amount of oxygen in their blood to keep them alive longer. But, if there is plenty of oxygen in the water, the frogs can actually move to a nearby spot with relatively warmer water³.

Terrestrial or land loving frogs have a different strategy to deal with winter. They will find a damp area in underground burrows, under leaf litter, or in deep crevices to escape freezing temperatures and frost.

Some frog species may actually overwinter at shallower depths than others; species that do this, such as the wood frog (Rana sylvatica), can tolerate freezing. These frogs use high concentrations of glucose (simple sugar) as a sort of “antifreeze” in their organs to keep them alive while parts of their body become frozen. Because of this, they can stay alive even while partially frozen with no breathing or heartbeat4! Once temperatures warm up, their heartbeat and breathing return to normal. 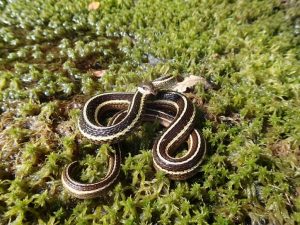 To escape the cold, these snakes overwinter in sheltered places such as burrows, rock crevices, and wood piles. Interestingly, many snakes will brumate in the same place each year, and often, they are not alone. It is common for snakes to spend the winter in a hibernaculum with other snakes, either of the same species or multiple different species.

Although the snakes may move a bit and drink a little water, they mostly remain within the hibernaculum with a slowed heartbeat and metabolism and no food until the weather is consistently warmer. Within their hibernaculum, though, some snakes may move around to relatively warmer spots to help increase their body temperature5.

4Storey, K. B. and J. M. Storey. 1984. Biochemical adaptation for freezing tolerance in the wood frog, Rana sylvatica. Journal of Comparative Physiology B, 155: 29-36.