Hunting Your Way Through Wetlands

Wetlands provide many services to us, like purifying our water, flood protection, and wildlife habitat. The animals that live in our wetlands can provide ample opportunities for outdoor activities like bird watching, fishing, and hunting. Delaware’s typical hunting and trapping seasons start in September and concludes at the end of January. Some of these species are migrants and pass through our wetlands on their way to wintering or breeding grounds, but most of these species are year round residents.

Continue on to learn about some of the hunting and trapping that you can do in the wetlands of Delaware and potentially partake if these opportunities seem interesting to you. 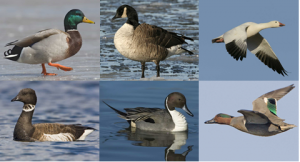 Starting with the most common hunting activity in our wetlands is waterfowl hunting, this consists of ducks, Canada geese, snow geese, and brant. These species use a diverse array of wetlands in the state from tidal wetlands to wooded depression wetlands. Wood ducks prefer non tidal wooded wetlands where they can nest in tree cavities, while snow geese will roost along tidal wetlands on their way to wintering areas.

Most of the waterfowl hunting in Delaware is focused on the winter migrations of these birds, they leave the arctic breeding grounds and fly through Delaware on the way to wintering grounds in the southern U.S.

Based on Delaware Fish and Wildlife mail surveys, the estimated harvest of ducks last year was just over 40,000 while Canada geese harvest was about 20,000, and snow geese was 11,000. This survey estimates that around 5,000 people enjoy waterfowl hunting in the states wetlands every year. 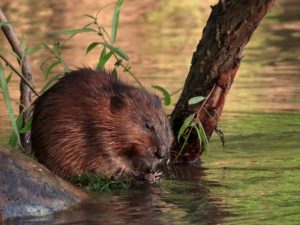 Muskrat are a year round resident of tidal salt marshes throughout the state, they create small mounds in salt marshes where they live. Muskrat are members of the rodent family but are actually omnivores and will consume vegetation but also frogs and fish.

They are one of the more common species to be trapped in Delaware and have been a Delaware tradition since colonization, with the meat and fur being the objective. The furs are sought after for clothing manufacturing, mostly in China, Russia, and Korea now that the North American fur demand has decreased significantly.

The meat from muskrat is a local delicacy and is often sold to local restaurants, local wild game dinners, or consumed by the trapper. If you are daring, some Delaware restaurants still serve muskrat and it can still be found at local butcher shops. 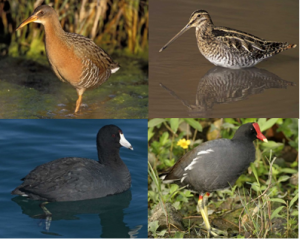 The non-waterfowl gamebirds I am referring to are the rails, snipe, coot, and the gallinules and moorhens. Most of these birds migrate through Delaware, with rails being the exception being year round residents.

Rails are a secretive marsh bird that inhabits our tidal salt marshes, with 4 different species being the target of sportsmen. The clapper rail is the most common rail found in Delaware, with the sora, the Virginia rail, and the King rail being the least common. Snipe are the next bird that hunters can target, and this is not a childhood prank. Snipe are actually a very common bird that hunters pursue. These birds usually can be found around open marshes and mud flats of our coastal wetlands. In the Delaware Fish and Wildlife mail surveys, they estimated that almost 400 rail and about 40 snipe were hunted last year.

Coots, gallinules, and moorhens are not as regional hunted as they are in other parts of the country but we do have them and they legally can be harvested. Coots can be found along marsh edges and can create large flocks on open water while moorhens and gallinules are more solitary and can be found along edges of marshes or ponds similar to rails. 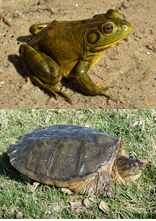 Bullfrog and Snapping turtles are year round residents and can be found in many of our freshwater wetlands throughout the state. Bullfrog hunting is slightly different from any other hunting that happens in wetlands, you are allowed to do it at night, you don’t use a trap or gun, and the frog season runs from May 1st to September 30th. Instead you can use a light at night in the warmer months and hunt frogs with a spear or gig. Bullfrog hunting is very common in the southern U.S., and is still practiced by many in the Delmarva region. Bullfrog hunting can be a very inexpensive hunting endeavor since only a light and gig are required once you have the proper license.

On the flip side snapping turtle trapping is a very labor intensive adventure and you will need a lot more equipment. You can still try and use a spear, gig, or net but it is usually not as successful as using traps. The snapping turtle season runs from June 15th to May 15th and each turtle has to be a minimum of 11 inches on the curvature of the top shell. Bullfrog and snapping turtle are the 2 most common herpetological prey for hunters to pursue and are abundant throughout the state.

Highlighted were just some of the opportunities to hunt or trap in the wetlands of Delaware, check the Delaware Hunting guide for the proper seasons and laws before partaking in these activities. You will need to purchase a hunting or trapping license and tag along with a friend or family member and enjoy the outdoors. Below are some online resources to help you if you would like to try hunting or trapping in Delaware.