Clean Water Act changes and what it means for Delaware

States and tribes across the nation are scrambling to assess how waters are protected within their jurisdiction under the federal Clean Water Act (CWA). Specifically, a recent U.S. District Court ruling to CWA Section 404, which is the federal program that regulates dredge and fill activities in traditionally navigable waters and wetlands, has changed the scope of what is regulated in some states. Additionally, newly proposed legislation in Congress could affect states approval authority under CWA Section 401, which requires any applicant of a federal permit to also get water quality certification based on that state’s water quality standards. 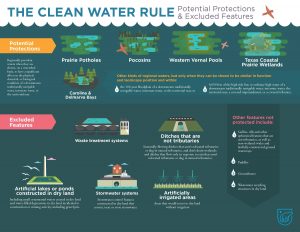 Section 401 Water Quality Certification has long been a successful partnership between federal and state water quality protection programs. Simply, the EPA has given states the ability to set water quality standards for wetlands and surface waters, and with it the authority to add valuable local knowledge through 401 Certification in coordination with federal approvals.

A new bill in Congress was created in reaction to two states holding firm ground in their ability to permit, through Section 401, large and significant energy projects. Since Section 401 gives the states the ability to veto federal government approval in considering how a project may affect a state’s waters, it’s viewed as a hurdle for large energy industry projects that may be beneficial to even more than one state. Proponents of the bill say it closes loopholes ripe for abuse, while opponents see the bill as a removal of state’s rights and the ability of states to have a say in protecting its wetlands and surface waters.

For Section 404, a ruling in mid-August by the South Carolina District Court (Charleston Division) found that the Environmental Protection Agency (EPA) and the Army Corps of Engineers failed to adhere to the Administrative Procedures Act in issuing the ‘Suspension Rule’ in February, 2018. The Suspension Rule was one of the steps taken by EPA and Corps in reaction to the Presidential Executive Order 13778 which set to rescind the 2015 Waters of the United States Rule (WOTUS), and replace it with a new rule. The Suspension Rule set to delay the 2015 WOTUS Rule until 2020 to allow time for creating a replacement. The 2015 Rule was developed to provide more clarity to the Section 404 program and much of it was based on review and recommendations by a Science Advisory Board assembled by EPA. The 2015 Rule received challenges in a few U.S. Circuit Courts leading to a stay of the rule nationwide. This new ruling in the South Carolina District Court puts back in place the 2015 WOTUS Rule for 26 states, including Delaware, while there are still District Court injunctions in place for the other 24 states. 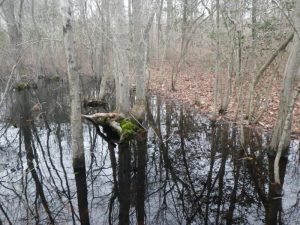 One of the main benefits of the 2015 Rule is that the Science Advisory Board reviewed scientific research that establishes the water ‘system’ connections between flowing surface waters and those adjacent wetlands that may not have a surface connection, but are just as important to downstream water quality within a watershed. In Delaware, we have ecologically unique wetlands known as Delmarva Bays or Coastal Plain ponds. These depression-like wetlands are vitally important to many plant and animal species, some state or globally rare, while also contributing to flood control and water filtration. (I.e. Delmarva Bays are good water quality filters for downstream waters.) There are similar wetlands to Delmarva Bays in other states such as the Prairie Potholes and Carolina Bays which are also included under the 2015 Rule.

There are still many moving parts to where water and wetland protection will end up, most importantly with state’s rights. Recently, the federal government has on one hand reached out to states in the name of cooperative federalism (404), but has also shown the desire to roll back state’s ability to protect its waters and wetlands (401).

In early August, the Corps released a statement encouraging states to assume Section 404 oversight. For the protection of wetlands and clean water, it is imperative to have baseline federal protection of intrastate waters. If water regulation is completely left to each individual state, states downstream from other states may have to deal with another state’s pollution. A baseline federal protection gives states a platform to build upon in protecting sovereign waters and wetlands, and a federal-state partnership in protecting these resources is vital.