Have you even been to a salt marsh and noticed that the river banks at low tide look like Swiss cheese? Marsh crabs create burrows in various shapes and sizes in the sediment to serve as refuges during high tide, at night, and sometimes even in the winter. These burrows can greatly vary in shape and size depending on the crab species and the conditions of the salt marsh. Nonetheless, these burrows can be deep (>1 ft1) and can be densely aggregated in the marsh sediment. One study has measured up to 300 crab burrows per a squared meter2 and another study found that the burrows took up 14% of the sediment volume in the study area3!

Marsh crab burrows have been shown to increase the marsh’s ability to drain water, increase the decomposition rates in the sediment, and are a way for oxygen to get mixed down into the anoxic marsh sediments4. In fact, the respiration from marsh crab burrows has been found to account for 20-90% of the sediment respiration in a tidal marsh5! These ‘Swiss cheese’ holes are an integral part of the marsh ecosystem.

However, shifts in this ecosystem balance, such as an over-abundance of marsh crab, can wreak havoc on the tidal marsh. A little over a decade ago, tidal marshes in New England were experiencing huge die-back events. The population of the native purple marsh crab skyrocketed due to a lack of predation6 and the massive numbers of purple marsh crabs ate the cordgrass faster than it could grow. A perfectly healthy or slowly decaying marsh can depend on the fine balance of burrow density and which marsh crab species are most abundant.

Last summer, 15 National Estuarine Research Reserves conducted a coordinated marsh crab study to investigate marsh crab burrows – reaching across 15 different tidal marshes from Delaware (that’s us!) to California to Mississippi to Maine. This included field surveys to count burrow densities and identify the most dominant species present, desktop surveys to measure the marsh elevation and distance from a waterway, and analyses such as the nearest tidal datum. To help with the crab identification, pitfall traps where made from recycled tennis ball cans and passed around the Reserves (Figure 1).

Last September (2017), it was the Delaware National Estuarine Research Reserve’s (DNERR) turn to collect data. DNERR researchers deployed 30 pitfall traps which captured some of marsh crabs as they scrambled along the marsh surface. This metric cannot tell you the crab abundance, but it can tell which crab species are present. Crabs were identified, measured for size, and determined to be male or female (Figure 2). Next, DNERR researchers counted the number of burrows within a 0.25 meter quadrat at 30 different locations throughout a marsh at the St. Jones Reserve. Massive amounts of data were collected – especially when you factor in the other 14 other NERRS! The data analysis is still on-going and the 15 NERRS hope to have a manuscript completed by the end of the year. 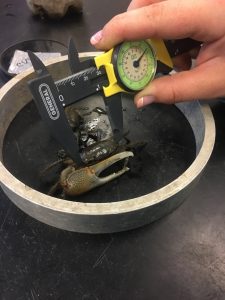 In our pitfall traps here in Delaware, we captured 66 marsh crabs and identified 3 different species. The majority were Uca minax, or the red-jointed fiddler crab. We also caught 5 Uca pugilator, or the sand fiddler crab. Lastly, about 5% of the crabs caught were Sesarma reticulatum, also known as the purple marsh crab, the same crab responsible for the New England salt marsh loss. But not to worry – the purple marsh crab is native and can be found naturally in low numbers throughout salt marshes in the Mid-Atlantic.

DNERR researchers hope to periodically repeat this study to see if any changes occur at the St. Jones Reserve. So stay tuned as we continue to analyze our data and compare it with salt marshes across the country!