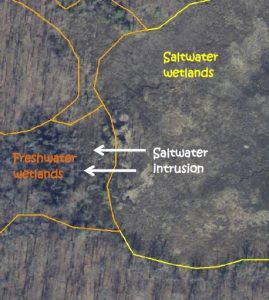 As you might imagine, sea level rise can increase water levels and cause more flooding. As that happens, salt water starts to move further inland. It may start to creep into freshwater areas through a process called saltwater intrusion. Higher waters can endanger coastal communities, while saltwater intrusion can affect our drinking water and agricultural lands. But we, WMAP, are also looking at the issue from our wetlands lens. How can sea level rise—and in turn saltwater intrusion—impact freshwater wetland habitats?

We want to know which of these scenarios is happening to freshwater wetlands in Delaware!

Locations of 15 field sites for this study.

To try to answer this question, we chose 15 study sites throughout Delaware where freshwater wetlands are next to saltwater wetlands. Those are the areas where we are most likely to see increased flooding and/or saltwater intrusion from rising sea levels.

We selected sites by comparing old and current state wetland maps. This allowed us to see where parts of freshwater wetlands may have started experiencing change. We also used old and current aerial imagery to select sites. Aerial imagery allowed us to see where vegetation changes, such as tree or shrub death, have begun to occur. We placed four sampling points at each field site in order to best describe the whole area that might be in transition. At each point for each site, we gathered data about water salinity, vegetation, and soils. 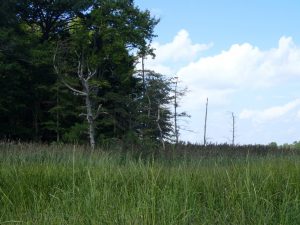 A cluster of standing dead trees is visible along the forest edge where the forest meets the saltmarsh.

What we have seen so far is that there are quite a few standing dead trees along edges of many forests that are next to saltmarshes. This shows that some forest edges are starting to die off as they face increased flooding and/or saltwater intrusion, as we expected. We have also seen that the common reed is moving into a lot of these areas where trees are dying off. This suggests that invasive Phragmites is colonizing areas before native saltmarsh plants have a chance to.

A lot of our fieldwork for this study was done in the 2017 field season, but we will be finishing up in the 2018 field season. Stay tuned for more detailed results and our conclusions!