Fiddler Crabs: From Burrows to Zoea 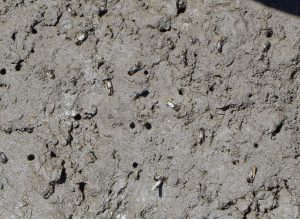 Fiddler crabs and their burrows at the St. Jones Reserve in Dover. Credit: Kari St.Laurent

Fiddler crabs are one of the most iconic critters in the salt marsh. Male fiddler crabs have an unmistakable single large claw, paired with a tiny claw, which is used to court female fiddler crabs. But did you know that crabs start their life as microscopic zooplankton? Fiddler crabs undergo multiple molts to grow from a tiny, drifting zooplankton to the rock-sized crabs we see scurrying around the marsh each summer.

Fiddler crabs create complex burrows within the marsh that serve as their homes, which can make the brown marsh mud look like Swiss cheese. Research has suggested that fiddler crab burrows help to move oxygen from the atmosphere to the roots of marsh cordgrasses like Spartina alterniflora.  However, too many fiddler crab burrows can stop cordgrass root mats from forming and potentially hinder plant growth.

Thus, a change in fiddler crab populations can affect salt marshes in different ways, making it a fine balance with a lot of unknowns. 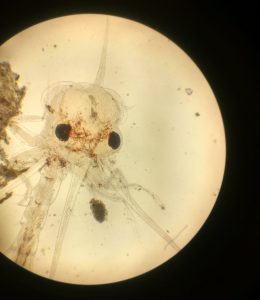 Magnified view of a zoea, or larval crab, from the St. Jones River. Credit: Kari St.Laurent

In the upcoming months, researchers, students, and volunteers working at the Delaware National Estuarine Research Reserve will be monitoring zooplankton diversity at the St. Jones Reserve in Dover. One of the most common types of zooplankton found in the brackish sections of the St.Jones River are zoea, or larval crabs! This monitoring effort will help us better understand which species of zooplankton are present and how that diversity changes on both short and long timescales.

Additionally, in the upcoming summer, researchers from the National Estuarine Research Reserve System are hoping to conduct a study to look at crab burrow densities within different marshes across the country.

Connecting the fiddler crab burrows we see in the ground with the microscopic baby crabs swimming in the water, will help us understand if fiddler crab populations are changing, and if that change has an effect on our salt marshes, for better or for worse.